Excellent organizations focus on each of these atypical parkinsonism disorders.  We list these organizations on our pages dedicated to each disorder.  Brain Support Network casts a wider net, describing and comparing the four disorders and their subtypes.

Given our extensive experience with brain donation, we know that the diagnostic accuracy of these disorders is low.  We know the diagnosis before the brain is delivered for autopsy and we learn the definitive diagnosis by the neuropathologist after autopsy.  Accuracy hovers around 50%, even for diagnoses delivered by expert neurologists.

These disorders are rare, difficult to diagnose, and moving targets as new subtypes are described.  One of BSN’s missions is to sketch the landscape so that laypeople can have meaningful discussions with medical providers and can serve as effective advocates.

To be diagnosed with Parkinson’s Disease, someone must have two of four symptoms: rigidity, bradykinesia (slow movement), tremor, or postural instability. In addition, someone must have a robust response to levodopa therapy, the standard medication of Parkinson’s Disease. And other explanations for symptoms—such as stroke, antipsychotic medication, or atypical parkinsonism disorders—must be excluded.

The Plus term in Parkinson’s Plus refers to the fact that the atypical parkinsonism disorders have symptoms on top of parkinsonism symptoms. The term Parkinson’s Plus has gone out of fashion because these diseases don’t always look like Parkinson’s. They might look more like Alzheimer’s Disease, frontotemporal dementia, or stroke.

What is dementia? Dementia is decline in memory and thinking skills so severe that it impedes normal life. There must be problems in two or more domains such as memory, judgment, language/communication, perception/visuospatial skills, and attention. There may be impairment in social functioning, the ability to function at work, the ability to perform activities of daily living (bathing, grooming, dressing, toileting, self-feeding, ambulating/transferring), or the ability to perform tasks of independent living (grocery shopping, cooking, paying bills, maintaining a checkbook, housekeeping, taking medications as prescribed, using the telephone, etc.). Dementia is not a specific disease. The terms dementia and Alzheimer’s are often used synonymously but this is incorrect. Nor is dementia a part of normal aging.

LBD, PSP, and CBD are examples of non-Alzheimer’s dementias.  However, while those with MSA may experience mild cognitive impairment, dementia is an exclusionary criterion for Multiple System Atrophy.  Generally if dementia symptoms are present in someone diagnosed with MSA, we should question the MSA diagnosis.  An alternative diagnosis might be Lewy Body Dementia (also known as Parkinson’s Disease Dementia or Dementia with Lewy Bodies).

The following table provides a brief summary of the differences among atypical parkinsonism disorders.  Most exhibit parkinsonism symptoms; some exhibit dementia symptoms; each is identified by specific mis-folded proteins visible in the brain upon autopsy.

When a Board-certified neurologist delivers a diagnosis for any of the four atypical [arkinsonism disorders, the probability that the diagnosis is incorrect is approximately 50%. The only way to definitively diagnose an atypical parkinsonism disorder is by postmortem microscopic analysis of brain tissue.

All four disorders have “subtypes” that may differ subtly in pathology distribution or reflect distinct clinical symptoms documented before death. The medical profession is not unanimous in its embrace of the listed subtypes because different researchers report different groups of subtypes.

These overviews are focused on Parkinson’s Disease (PD), and compare
PD with the atypical parkinsonism disorders:

Parkinson’s Disease vs. Parkinsonism – What is the Difference?,
Parkinson’s Foundation Podcast, February 26, 2019

Parkinsonism is a general term that describes a cluster of symptoms. Not everyone with parkinsonism has Parkinson’s Disease, though the majority do.

In this 2015 landmark MSA study of 134 patients clinically diagnosed with MSA, only 62% actually had MSA upon brain autopsy. BSN was responsible for almost 25% of the MSA brains for this study.  Learn more.

John Aloysius Brogan, born in 1931, received degrees from the University of Chicago and the University of Pennsylvania and was the author of “Clear Technical Writing”. He was an amateur boxer in his younger years.

Neurodegenerative symptoms crept up slowly. Over 10 years before his initial diagnosis, John started to experience an REM sleep disorder. In the middle of the night he would start boxing his wife, Pat, who would scream at him to stop. Over the years, Pat had to keep replacing their lower sheets because John wore holes in them by moving his legs at night.

On a trip back home to Allentown and Philadelphia, some of John’s adult children noticed that John would get lost and that his driving skills had deteriorated. He started to need help on the computer—at which he had been an expert. His speech became very soft and his walk had become a shuffle. In 2009 he was diagnosed with Parkinson’s Disease.

John’s cognitive symptoms gradually became worse. He was hallucinating, falling frequently, and becoming very combative. After he fell and broke his wrist, Kaiser put him on palliative care and later on hospice. When Pat suggested to John’s neurologist that John seemed to have symptoms consistent with LBD, the neurologist asserted that the diagnosis should be Parkinson’s Disease Dementia and ended the conversation.

John was administered Seroquel while in palliative care which made it much easier for Pat and their children to continue to care for John at home. John died in 2016, after almost 2 years on hospice. Pat donated John’s brain to the Mayo Clinic in Jacksonville and autopsy confirmed Lewy Body Dementia with Parkinsonism. 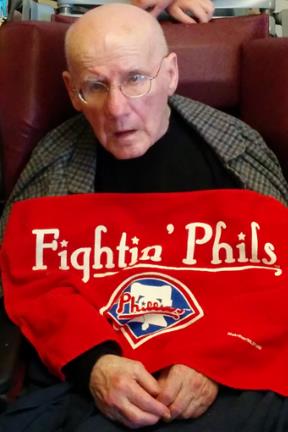