Progressive Supranuclear Palsy (PSP) is the second most common of the four atypical parkinsonisms and exists in two variants: Richardson’s syndrome (PSP-RS) and PSP-parkinsonism (PSP-P).   Depending on whom you are talking to, it is classified as an atypical parkinsonism disorder, a non-Alzheimer’s dementia, a type of frontotemporal degeneration, or a sub-cortical dementia.

The key symptoms of PSP are bradykinesia (slow movement), rigidity (stiffness), and postural instability…in other words, parkinsonism. As a result, we need to look deeper for distinguishing symptoms.

The symptoms of these two main types are so different that they seem to be entirely different disorders. The PSP-RS disorder described by Drs. Richardson, Steele, and Olszewski in 1964 can be called “classic PSP.” The diagnostic criteria of PSP are focused on this classic type:  supranuclear gaze palsy (inability to voluntarily look downward or upward), early falls, and dementia. The classic type is referred to in an important 2005 paper as “Richardson’s syndrome” (after Dr. Clifford Richardson, one of the early describers). See  “Characteristics of two distinct clinical phenotypes in pathologically proven progressive supranuclear palsy: Richardson’s syndrome and PSP-parkinsonism,” Brain 2005, Williams, et al  This is the more common type and the more easily recognized by neurologists.

The second type, PSP-parkinsonism, is much harder for neurologists to diagnose accurately. Someone with this type of PSP can look like he/she has Parkinson’s Disease.  Because a third of people may have this second type, it’s important to understand the differences.

Over time, most of those with PSP-parkinsonism do experience falls and supranuclear gaze palsy. Only about half experience cognitive loss. This means that PSP-parkinsonism patients can become more easily diagnosed with PSP when they develop the more classic symptoms of the disease. On the other hand, those with Richardson’s syndrome do not develop tremor or have a response to levodopa therapy.

The falls of PSP are often called “unexplained falls” because the person seems to fall out of the blue, for no obvious reason. Prior to being diagnosed, sometimes the person who falls explains that his/her shoes don’t fit properly, he/she is in an unfamiliar place, or he/she became dizzy.

Those with PSP can have a very awkward gait. Friends or strangers might suspect the person is drunk because of the wide stance and staggering gait.

Eventually those with PSP develop swallowing problems (dysphagia). The most common causes of death are related to these problems: development of aspiration pneumonia or the person loses the ability to swallow.

In a sense, there’s a long list of possible symptoms. No two people with PSP look exactly alike. Plus there are other types of PSP that are not as common — such as pure akinesia with gait freezing. Richardson’s syndrome and PSP-parkinsonism are only the two most common types.

Survival time varies greatly based upon the type of PSP. Survival time in Richardson’s syndrome is just under six years, while the survival time in PSP-parkinsonism is just over nine years. These are averages. And these figures are based on the Brain 2005 paper mentioned above.

There is remarkably limited treatment for PSP. The most effective treatments are the therapies: physical therapy, occupational therapy, and speech therapy. Therapies are pinpointed on prevention of falls and aspiration pneumonia.

Exercise is key for fall prevention and maintaining mobility. A member of our local support group was told by his wife’s movement disorder specialist that she lived an additional two years due to exercise on a special treadmill.

The medication that can be prescribed and any other treatments are focused on a few symptoms that may respond to medication or treatments such as depression, urinary incontinence, and dry eyes. Those with PSP-parkinsonism do have some response to levodopa medication. There is no evidence that any of the Alzheimer’s medications are helpful with the dementia in Richardson’s syndrome.

A handful of organizations consistently deliver quality information about PSP. Click the link for each organization to review their web sites:

Brain Support Network continually reviews most of the resources available on PSP. In our opinion, these web pages, documents, and videos are the most helpful resources for families:  (last updated November 2017)

Movement disorder specialist Dr. Brent Bluett describes the symptomatic treatments possible for MSA that can improve quality of life. His message:  Each treatment individually may be minor, but in sum they can make a significant difference. There is always hope! This February 2019 webinar was co-hosted by Stanford University and Brain Support Network.

Nine US researchers provide updates on the latest PSP and CBD research. In the practical sessions, we hear from a neurologist, a neuro-ophthalmologist, a social worker, a physical therapist, a speech therapist, someone with CBD, someone with PSP,and a caregiver to
someone with PSP. This conference, co-organized by Brain Support Network and UCSF, was held in late October 2017.

The webinar, produced by Stanford University and Brain Support Network, was held in August 2017.
youtube.com/watch?v=X1hBA9epCX8&t=6s

Notes from the webinar (presentation and question-and-answer):
brainsupportnetwork.org/recording-notes-from-diagnosing-psp-webinar-august-2017/

12-page document from CurePSP was last updated in October 2017.

Falls and Dysphagia in PSP

This excellent 6-page report was published for healthcare professionals in Summer
2015 by The Association for Frontotemporal Degeneration.  The composite story of “Jackie Riddle” is actually an amalgam of two Brain Support Network volunteers’ loved ones — Phil Myers’s wife Jackie Myers and Robin Riddle’s father Larry Riddle.

Treatment of and Research on PSP

Dr. Adam Boxer, a leader of a worldwide clinical trials in PSP, speaks for about 40 minutes in the PSP break-out session at the October 2012 atypical parkinsonism symposium, organized by Stanford University and Brain Support Network.  Before Dr. Boxer’s talk, Dr. Irene Litvan, one of the world’s top experts on PSP, gives the keynote.

Your Personal Guide to PSP

The first section of this excellent 110-page introduction to PSP and CBD focuses on symptoms such as cognition/mood, mobility/falls, fatigue/sleep, pain, swallowing, vision, and bladder/bowel. Published April 2013 by The PSP Association (UK).

This November 2009 conference for allied health professionals (RNs, PTs, OTs, STs, social workers, etc) in Melbourne, Australia was recorded. One of the world’s top researchers of PSP, Dr. David Williams, based in Melbourne, is featured.

This February 2014 conference, co-organized by Brain Support Network, focused on what UCSF Memory and Aging Center researchers have learned thus far about PSP and CBD, and what research is underway. Most of the eight talks are about 14 minutes in length. There’s also an hour-long question-and-answer period with researchers.

A Physician’s Guide to PSP

Though this video was produced by CurePSP and the PSP Association for MDs, most of it is understandable to laypeople. This 18-minute video features some of the world’s top experts in PSP including Dr. John Steele and Dr. Lawrence Golbe.

NINDS is part of the NIH. This web page was last updated in September 2015.

CurePSP’s comprehensive guide to signs, symptoms, and management strategies, published in the summer of 2016.  There is an excellent one-page summary of PSP.

Some of CurePSP’s family conferences are recorded and available online.

This 156-page resource on PSP (mostly), CBD, and MSA was updated by CurePSP in January 2018. Topics include incontinence, constipation, dry eyes, and visual issues.

PSP: A Primer for the Newly Diagnosed

14-minute video full of facts from PSP expert neurologist Dr. Larry Golbe, and full of hopeful messages from a person with PSP, his wife, a volunteer, and Dr. Golbe.

This excellent 60-minute tutorial is for general neurologists, by CurePSP. Most of the video is understandable for laypeople.

This blog, begun in March 2014 and updated in August 2017 after a long hiatus by Dr. Lawrence Golbe, a PSP expert, is oriented towards clinicians and researchers, but public is welcome. “Registry” is open to all.

The National Institute of Neurological Disorders and Stroke and the Society for Progressive Supranuclear Palsy (NINDS-SPSS) are the source of the diagnostic criteria reported on this page.  See Litvan I, et al. “Clinical research criteria for the diagnosis of progressive supranuclear palsy (Steele-Richardson-Olszewski syndrome): report of the NINDS-SPSP international workshop, Neurology. 1996 Jul;47(1):1-9.

These criteria describe the classic type of PSP, Richardson’s syndrome. We do not list criteria for PSP-parkinsonism or the less common types, consistent with the fact that they are much more difficult to diagnose.

PSP-RS is characterized by a set of symptoms.  In the NINDS-SPSS report, symptoms were assigned to one of two categories:

The diagnosis of the disease depends on  the symptoms present.  The report delivered three classes of diagnosis: 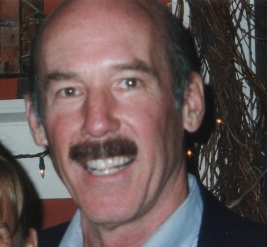 After two years of worsening symptoms and misdiagnosis, Dennis was diagnosed with probable Progressive Supranuclear Palsy (PSP) in 2002 at the age of 57. With that diagnosis Dennis was told there was no known cause, treatment, or cure…and he was sent home.

Later, Dennis consulted with Drs. Bruce Miller and Adam Boxer of the Memory and Aging Center at the University of California at San Francisco (UCSF). UCSF was researching PSP and Dennis agreed to participate in its program, hoping that this research would eventually lead to a cure for others afflicted with the disease.

Dennis’s MRI scans, blood, and spinal fluid samples were used to research new biomarkers for the diagnosis of PSP and evaluate the effectiveness of novel therapies.

Time ran out for Dennis in 2007, but brain donation to UCSF and subsequent autopsy confirmed his clinical diagnosis of PSP and revealed the presence of Alzheimer’s.