Lewy Body Dementia (LBD) is the most common of the four atypical parkinsonisms and exists in two variants: Dementia with Lewy Bodies and Parkinson’s Disease Dementia.  Depending on whom you are talking to, LBD is also classified as a non-Alzheimer’s dementia.

Lewy Body Dementia (LBD) is an umbrella term that refers to two diagnoses:

The terms DLB and PDD are of primary interest to researchers and less to families and clinicians. Whether someone is diagnosed with DLB or PDD is largely determined by the arbitrary “one-year rule”: if the onset of dementia or psychiatric symptoms is within one-year of parkinsonism, the disorder is called DLB, and if parkinsonism continues for more than one year before the onset of dementia, the disorder is called PDD. Unfortunately, the one-year rule ignores the possibility that parkinsonism may never be part of DLB.

Though the diagnostic criteria for DLB and PDD differ, the associated symptoms are largely the same:

Other important symptoms that are suggestive of LBD include:

Note: these symptoms are for what we might refer to as “pure” LBD.  In most brain bank studies, those with Lewy Body Dementia also tend to have Alzheimer’s pathology, vascular pathology, or other co-occurring pathologies.

What about memory problems? Note that many people with DLB receive a high score on the Mini-Mental Status Exam (MMSE) so that test is often not relevant in DLB. Those with PDD may have more memory impairment than those with DLB. It could be that if memory problems are present, Alzheimer’s pathology is to blame.

Pharmacological treatment of LBD is complex given how sensitive many people are to all kinds of medications.

If hallucinations are frightening or if there are delusions, often atypical antipsychotics are prescribed. Many LBD specialists prefer clozapine or quetiapine. Note that there is an FDA black-box warning on all antipsychotic medications for those with dementia. That said, many in our local support group find these medications to be life-savers. In May 2016, the FDA approved a new medication for psychosis (hallucinations and delusions) in PDD.

LBD experts warn against taking anticholinergic medications (such as many bladder/incontinence medications) and typical antipsychotics (such as haloperidol). Also, given the risks of falls, experts encourage caution for all medications, especially those that can cause sedation (i.e. other-the-counter cold or allergy medications, sleep aids, cough syrups). We always recommend that you consult your physician prior to administering any medication other than what has been prescribed.

A handful of organizations consistently deliver quality information about LBD. Click the link for each organization to review their web sites:

Brain Support Network continually reviews most of the resources available on LBD. In our opinion, these web pages, documents, and videos are the most helpful resources for families:

An Introduction to Lewy Body Dementia and Medical Alert Card

This publication of the Lewy Body Dementia Association is for newly diagnosed.

This tri-fold pamphlet from the Lewy Body Dementia Association provides an excellent introduction to LBD.

This eight-panel pamphlet from the Lewy Body Dementia Association provides an excellent introduction to LBD.  Published in 2011.

Treatment of and Research on Dementia with Lewy Bodies

This helpful update on DLB was given by Dr. Geoff Kerchner, a behavioral neurologist. This October 2012 Stanford University (SF Bay Area) event was recorded, and the video available online. Brain Support Network was one of the organizers.

The Reality of LBD – Hallucinations & Delusions and How to Manage Them

This hour-long webinar in July 2017 is a terrific introduction to the psychiatric and behavioral problems in DLB by Dr. James Galvin.  He addresses the challenges in assessment and management of these symptoms.

Dr. Veronica Santini, a Stanford University neurologist, describes the symptoms of OH, lists the conservative and medication interventions, and answers questions. This September 2017 webinar was co-hosted by Brain Support Network.

This 2013 article in the Cerebrum publication of The Dana Foundation was written by Drs. Meera Balasubramaniam and James Galvin addresses diagnostic.

This one-hour October 2011 LBDA webinar features Dr. James Galvin, one of the US’s top experts on LBD. He reviews the diagnostic criteria for both DLB and PDD. And he shares treatment options.

This excellent 100-page publication from the Parkinson Foundation has a terrific chapter on Dementia with Lewy Bodies.

This very useful guidebook by Dr. J. Eric Ahlskog, a neurologist with years of LBD experience, is written for the lay audience. Published in September 2013.

Life in the Balance: A Physician’s Memoir of Life, Love and Loss with Parkinson’s Disease and Dementia

This memoir by Thomas Graboys, MD and Peter Zheutlin, was published in 2008. Many caregivers in our local support group have read aloud parts of this book with their family member with LBD.

These webpages examine causes, relationship with age, symptoms, and treatment.

This straightforward explanation of DLB symptoms, diagnosis, causes, and treatments includes a list of key differences between Alzheimer’s and DLB.

10 Things You Should Know About LBD

This series from the Lewy Body Dementia Association covers sleep and medication. Note especially the briefs written by Rosemary Dawson on behavioral changes.

This 40-page booklet was updated in June 2018 by the National Institute on Aging. It describes the main symptoms of DLB and PDD.

This thorough presentation on LBD and its treatment, with an extensive Q&A, was presented by Dr. Bradley Boeve in October 2018 in Michigan.

Many Faces of Lewy Body Dementia

This January 2007 family conference at the Coral Springs Medical Center in Florida was recorded. The presentations by psychiatrist Dr. Jonathan Stewart and neurologist Dr. Jay Van Gerpen are excellent.

Each of these two disorders is characterized by sets of symptoms.  Symptoms fit into one of the following five categories.  They are:

The diagnosis of either disease depends on  the symptoms present.  There are three classes of diagnosis:

Because various disorders (and sub-disorders) have been identified and characterized at different times by different researchers, this framework is not universally used to define disorder symptoms and diagnostic criteria.

The two sets of diagnostic criteria are for what we might refer to as “pure” DLB or “pure” PDD. In most brain bank studies, those with Lewy Body Dementia also tend to have Alzheimer’s pathology, vascular pathology, or other co-occurring pathologies. The diagnostic criteria cannot account for “mixed dementia,” where more than one type of dementia occur simultaneously.

Symptoms and Diagnostic Criteria for Dementia with Lewy Bodies (DLB)

The symptoms and diagnostic criteria for Dementia with Lewy Bodies (DLB) are different than those for Parkinson’s Disease Dementia (PDD).  Here we cover DLB.

The source of these criteria is Diagnosis and Management of Dementia with Lewy Bodies: Third Report of the DLB Consortium, McKeith et al, Neurology, December 2005. While only the abstract is free, the full article is available for purchase.

The symptoms and diagnostic criteria for Parkinson’s Disease Dementia (PDD) are different than those for Dementia with Lewy Bodies (DLB).  Here we cover PDD.

The source is Clinical diagnostic criteria for dementia associated with Parkinson’s disease, Emre, et al, Movement Disorders, 2007 September 15; 22(12):1689-707.  This article assigns symptoms to “Groups”.  We’ve repeated the Group classification here, but have assigned a descriptive name to the assemblage, as well.

Tom Swiderek was born in Chicago in 1943 and purchased his first motor scooter (from Sears Roebuck) at the age of 10 with money he earned delivering newspapers. Tom started his own business, wholesale distribution to the locksmith industry, and put in countless hours to make it successful. He sold the business in 2008, and retired with his wife to their dream home in southwest Wisconsin.

While Tom had always had “active dreams,” the first indications that something was wrong were his stooped posture, shuffling gait, and constant fatigue. He then started having visuo-spatial difficulty, both when driving and reaching to grasp something. His family dismissed these problems as “age-related” vision problems.

After emergency surgery in 2017 for an enlarged prostate, and the required anesthesia, Tom became a different man. He was paranoid–certain that hospital staff wanted to kill him. Despite a diagnosis of Parkinson’s Disease in 2017, prompted by movement issues, Tom never responded to levodopa. He was always dizzy and fatigued, unable to manage daily tasks.

Finally, in October 2018, after a referral to the movement disorders clinic at the University of Wisconsin Hospital (UWH) in Madison–and an intervening visit to UWH’s emergency room–Tom was diagnosed with Lewy Body Dementia.  He moved to a skilled nursing facility.

The day after Thanksgiving 2018, Tom suffered a pulmonary embolism.  While Tom recovered, he started leaning more to one side (the so-called “Lewy lean”) and using his hands became more difficult.  Tom’s voice, too, grew progressively quieter and his face expressionless though he never lost his memory.

Tom entered hospice care in January 2019, and passed away peacefully on a Sunday morning, in March. Tom said “if something can be learned to keep just one person from getting this horrible disease, my having it will have been worth it.” Tom’s brain was sent to the Mayo Clinic in Jacksonville, Florida, where the diagnosis of Lewy Body Dementia was confirmed. 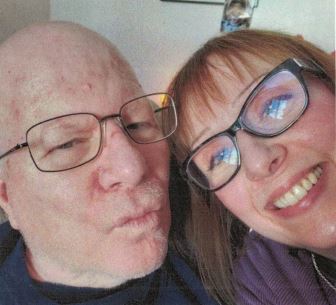