Dr. Neng C. Huang has served as Brain Support Network’s Medical Advisor since our incorporation as a 501(c)3 non-profit in 2012. Dr. Huang is a movement disorder specialist and board certified neurologist. Dr. Huang is a principal at the Valley Parkinson Clinic in Los Gatos, California.

Dr. Huang received his medical degree from Shanghai Medical University in China and his Ph.D in Pharmacology from the University of Texas Medical Branch at Galveston in 1994. After a stint as a neuropharmacologist working on early detection stroke and neuroprotection, he went back to finish his clinical training in 1997. He completed his internal medicine internship and neurology residency at Long Island Jewish Medical Center in New York in 2001, where he was the chief neurology resident. This was followed by a two year movement disorder fellowship at Beth Israel Medical Center in New York focusing on the diagnosis and management of advanced Parkinson’s disease and Deep Brain Stimulation (DBS) therapy.

Dr. Huang joined the world-renowned Parkinson’s Institute in 2003 as a movement disorder specialist. He left the Institute in 2009 and started his independent Valley Parkinson Clinic, focusing on PD patient management and education. Dr. Huang’s main expertise is in the management of advanced Parkinson’s disease and related movement disorders, including complex pharmacotherapy and DBS programming. As a neuropharmacologist, he has an in-depth understanding of how drugs work at various stages of Parkinson’s disease. He works closely with functional neurosurgeons at Stanford and UCSF in evaluating candidates for DBS therapy. He performs DBS programming and medication adjustment post DBS surgery. Dr. Huang’s other expertise includes Chemodenervation therapy (Medical Botox) for dystonia and spasticity.

Dr. Huang is board certified in Neurology, and is a member of the American Academy of Neurology, the Movement Disorders Society, the American Medical Association, the Santa Clara County Medical Society and the California Medical Society. He is affiliated with El Camino Hospitals at Mountain View and Los Gatos, California. His personal interests include spending time with his family, meditation, rope jumping, and walking with his dog. He is an active member at Silicon Valley Christian Assembly. 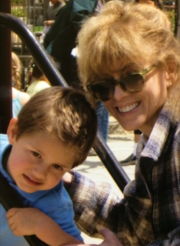 Susan Jean Hutton was a paralegal secretary for 40 years and enjoyed writing as a hobby, having published a book and several short stories for national magazines.

Sue first started having involuntary movements in her left (non-dominant) hand at the age of 58. The left hand and arm eventually became an “alien limb.” Sue started having difficulty dressing herself as well as other apraxia symptoms. Her cognitive skills started diminishing as did her ability to walk and talk.

When Sue died at 64, her brain was donated to the Mayo Clinic in Jacksonville, Florida. Sue’s sons wanted their mother’s brain be autopsied to learn conclusively the cause of death and to be forewarned of any hereditary implications. The Mayo Clinic reported severe Alzheimer’s and Lewy Body Dementia.

The pictures of Sue with her first grandson, Colton, were taken approximately 6 years apart.